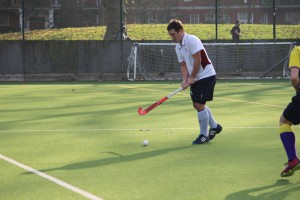 Steve Turnbull; a vintage weekend with a second goal in two weeks stolen off him, a last gasp 3-2 winner conceded in Bournemouth and then a 3 hr trip to Dereham on Sunday

Epsom made the long trip to league-leaders Bournemouth on Saturday. Following a two hour journey Epsom started surprisingly brightly and Paul Atkinson bundled home an early short corner for 1-0. Bournemouth soon struck back with a smart reverse-stick finish making it 1-1, but Epsom were playing nicely and just before half time Steve Turnbull jinked down the right by-line and his cross/shot went in scrappily off a mixture of a defender and James Midmer for 2-1.

The second half was a different story; Bournemouth stepped up their play significantly and took control. Epsom were restricted in possession but their defence held on grimly with the back four of James Harris, Ali Murrell, Chris Allison and Liam White all brilliant, and Joe ‘the gazelle’ Lazell tireless in midfield a-la Leicester City’s N’golo Kante. Epsom looked to be holding out at 2-1 before some late drama; Bournemouth had a goal disallowed and two men sin-binned but then equalised with 9 men at 2-2. Right on full time, Epsom conceded possession and from a final attack Bournemouth slung a ball in and a neat deflection flew into the roof of the net for 3-2.

Epsom were gutted not to close this out and only a double McDonalds salvaged the A31 / M27 / M3 / M25 route home. Epsom will hope to bounce back next week at home to Basingstoke. On a brighter note, the Over 40s Trophy trip to Dereham brought a win on penalties and a semi-final spot.