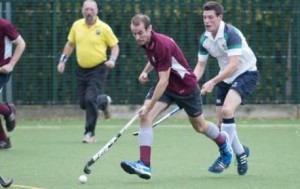 Mike Atkinson set up all three of Epsom’s goals

Mike Atkinson’s tireless running and assist play proved the difference as Epsom ground out a 3-1 win against Chichester 2s at a rain-lashed Therfield School. Some heavy early pressure from Chichester saw Epsom on the back foot, but on 10 minutes Mike Atkinson broke down the right and struck a superb long pass to play in James Midmer through the middle who fired home for an early 1-0 lead. Chichester continued to press for much of the half but Epsom dug in, gradually improved and Joe Lazell’s industry meant they eventually got their act together going into half time.

The second half saw a much better Epsom performance, the home side retaining possession much better and the inventive Scott Barton gaining more influence. Several Epsom chances had come and gone before Paul Atkinson deflected home a short corner to make it 2-0 on 55 minutes. Epsom were pouring forward at this stage, but Chichester dug in and set up a nervy finish by scoring a fast counter-attack goal with 8 minutes to go. Mike Atkinson almost immediately settled any nerves with a jinking run setting up Paul Atkinson to sweep home for 3-1.

Having weathered an early storm Epsom ended on the front foot and next week face a tricky away assignment at Havant 2s, last year’s league winners.