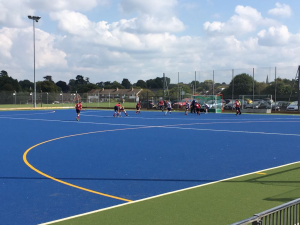 Epsom started their pre-season campaign with a 4-1 win away at Maidenhead, who finished 4th in the parallel MBBO league last season.

Sunshine and 25 degree heat looked set to put early pre-season fitness to the test, but Epsom started in top gear racing into a 3-0 lead after just 10 minutes. Just 2 minutes in a flowing move played in Steve Turnbull who beat two defenders and squared for a simple finish for James Midmer. Soon after an almost identical move saw Scott Jones find Midmer at the back post for 2-0. Ben Hildrey then fired home a short-corner dragflick for 3-0 and Scott Jones made it 4-0 after 20 minutes. Right on half-time a strong counterattack saw Maidenhead make it 4-1.

The second half saw an initial backlash from Maidenhead, who dominated the third quarter with greater attacking possession and circle entries, but they were denied by strong work from centre-back pairing of James Harris and Oli Hildrey, with Ed Burton-Brown also making some sharp stops. The game then fizzled out a bit in the fourth quarter as both sides looked to keep possession in the hot conditions. Paul Atkinson and Midmer both had late chances to add a fifth, but in truth this would have been fairly tough on the hosts who played well. Epsom’s next week take on Purley who play in South Prem 2.