Epsom travelled to sunny Reigate on Saturday with the ability to finish anywhere between 3rd and 11th (relegation zone) in what has been a very tight Surrey / Hampshire League 1. Reigate were in a similar position although mathematically safe from 11th spot. Reigate started the game much stronger with James Chesterton firing home a short corner dragflick after just 3 minutes to put the hosts 1-0 up. Reigate then forced a string of early short corners with Epsom having to defend resiliently. Epsom eventually woke up and won a short-corner where a scrappy move broke to Alex Bond, who slammed home his first goal of the season. Reigate immediately struck back by turning over the ball in midfield to find striker Tom Dumas who smashed home a fine finish for 2-1. Reigate remained the better side in the first half and Epsom were lucky not be further behind at the break. A rocket was administered at half time. Epsom emerged much stronger in the second half with James Midmer levelling it up at 2-2 by firing home an improvised short corner strike. Epsom started to control possession but were not precise enough in attack. Both sides then traded yellow cards and chances in a frantic last 15 minutes where players came and went with frequency, often at the same time. Eventually both umpires had understandably had enough and time was called. A draw that ultimately suited both sides who stayed mid-table, with other results seeing Epsom staying 8th and able to finish no lower than 10th. They could even finish 4th if they can win their final rearranged game on April 9th against Havant 2s. All support welcome! 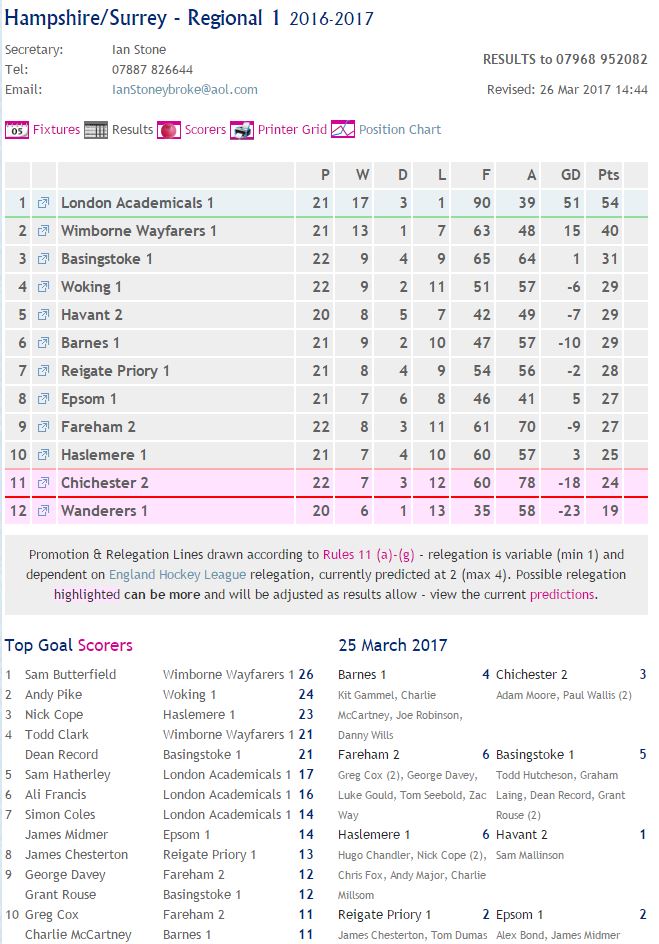