Scott Barton fired home a hat-trick as Epsom eventually ran out comfortable winners against Hamble at Therfield School on Saturday. Barton slung home an early short-corner (1-0) amid torrential rain, but Hamble fought hard and the first half became an even midfield scrap. Just before half time Hamble’s lightning quick right winger Nick Williams won a penalty stroke, converted by Paul Barber for 1-1. Just 30 seconds remained, but Epsom engineered one more attack and skipper James Midmer deflected home Joe Lazell’s pass to make it 2-1 on the stroke of half time. 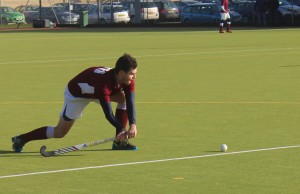 The second half saw conditions drying out and Epsom finally started to move the ball with more fluency. Just 5 minutes in an attacking move was switched left to Paul Atkinson who fired in a ball that eventually rolled into the path of Barton to hammer home a reverse stick shot for 3-1. Soon after, an almost identical attack sparked chaos and Barton slammed home another reverse-stick shot for his hat-trick (4-1). Hamble subsequently threw men forward but Epsom defended strongly and saw increasing space on the counterattack. Oli Hildrey rumbled up from the back to fire home a short-corner for 5-1, before Midmer finished off a counter-attack created by Steve Turnbull to make it 6-1. Epsom ‘keeper Ed Burton-Brown made a superb triple save right on the final whistle to keep it 6-1.

The second half performance was good from Epsom, who next up travel to Fareham 2s; the first in a series of tough games heading into the Christmas break.