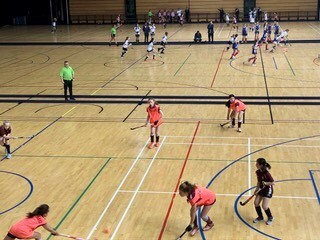 Epsom Hockey Club were back at the Copper Box Arena for the Indoor Championships at the end of December hoping to go one more than last year’s silver medal. This year the Club entered the GU12s, GU16s and GU18s tournaments.

The GU12s were in Group B with matches against Hertford, Wimbledon and Old Loughts. Starting strong, they won all three matches scoring five and conceding none! They continued their brilliance with a 3-1 win over Saffron Waldon in the first of three matches in the finals. Next up was a hard battle against Wayfarers which ended 0-0. With all to play for, they met Surbiton in their final match. Another tough and action packed match ensued with Epsom scoring the only and winning goal in the last 30 seconds. Cup Winners!

Excellent achievement and well done to all the girls. A fantastic team effort! Thank you to Mark and everyone involved in getting the team to the tournament. Congratulations!

The GU16s proved to be a tough one. Our girls started well with a great 3-0 win over Old Loughts in the round-robin tournament. The field was exceptionally strong this year and despite best efforts, the team were beaten by Guildford, Surbiton and Sevenoaks, got a couple of goals against Marlow and lost 3-0 to eventual winners Southgate. We placed 9th overall.

It was the Club’s first time in the GU18s tournament and a tough start with a 6-0 loss to Southgate. From here it was onwards and upwards with a no score draw against Teddington and a 2-0 win over Old Loughs in the group. This put them in the running for the Trophy and there was no stopping the team as they improved match by match throughout the day. Further wins against Teddington, Chelmsford and Saffron Waldon amassing 14 goals and conceding only one, saw them lift the Trophy! The future is bright for these young players who will look to go one better next year for sure.

All in all a pretty successful weekend for our girls. Well played everyone. What a great weekend! Thank you to all involved in making the tournament happen, to the players, coaches and umpires. Winners are grinners. Here’s to the next one in Derby (May 2020)!