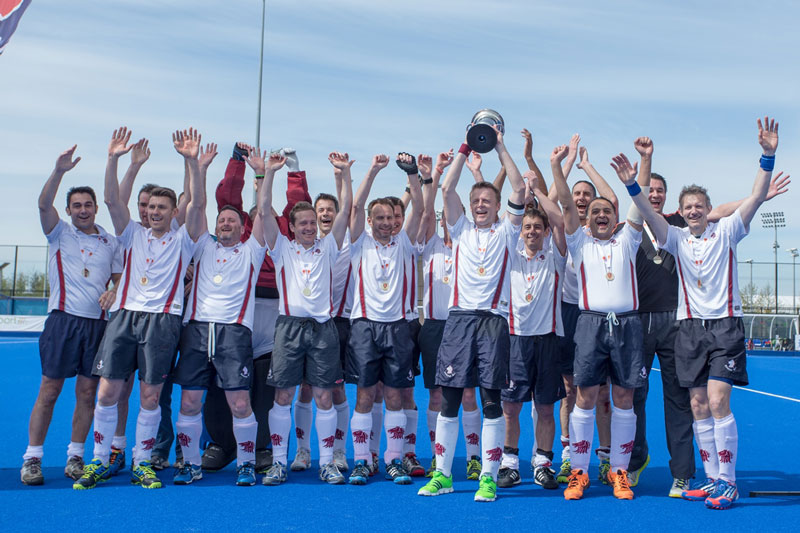 Epsom HC won an unprecedented 3 trophies in the England Hockey National Finals over the bank holiday weekend. The ladies O35’s started the landslide by beating Jersey 1-0 on Saturday. The mens O40’s team continued the winning on Sunday morning by beating local rivals Purley Walcountians 2-1. The clean sweep was completed by the mens O50’s team on Sunday afternoon by beating Ipswich 3-2. Individual match reports are below. 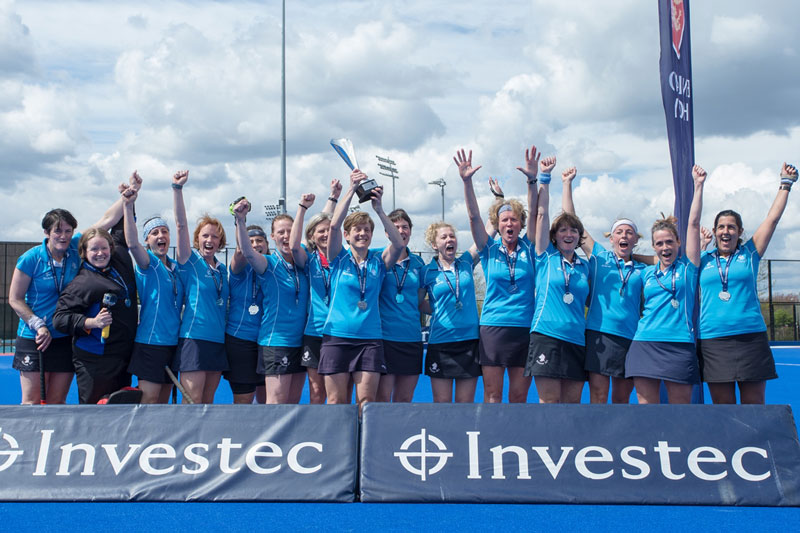 A last minute goal from Epsom brought heartache to Jersey in the Investec Women’s O35 Trophy Final. As the sun came out over Lee Valley hockey and Tennis centre so did Epsom, dominating the game from the first whistle. Paula Winsor and her silky moves gave the Surrey outfit hope of getting on the score sheet in the first half but it wasn’t to be. As half-time approached Jersey came alive with chances from Lisa Grant but unfortunately for the travelling fans she could not find the net.

Jersey came out the second half strong but Epsom were quick on the counter attack forcing Katie Ridley to get a left glove to deny Sarah White a goal. Both teams were applying the pressure and it could have gone either way but with a penalty corner to Epsom and a chant from the crowd, White scored the match winner from a neatly executed penalty corner routine.

Penny Woods captain of Epsom O35 ladies
“It has been such a great squad performance throughout the competition and we have enjoyed every game this is just fantastic to win. We had our chances throughout the game and we couldn’t put them away but all we needed was that one last goal in the dying minutes to come away winners. We have two other teams in the final tomorrow so hopefully we can claim some more silver ware which will be brilliant for the club. This competition and finals weekend has been great so thank you England hockey. To watch the Great Britain team at the Olympics then to come back and see the legacy it has left for community sport is just fantastic.”

Epsom took the lead early on with an Ali Murrell drag flick. This gave them momentum with lightning pace on the wings from Andre Bailey really giving Purley’s defence something to do. Purley took their time to warm up but eventually found their form as they pressed the defence. An attacker was taken down by Colin Savage in the circle that lead to Wayne Bennett stepping up to slot the ball in the top left of the goal from a penalty stroke. Epsom responded just before the half time whistle with a fantastic solo effort from Matt Peaty beating the keeper to give Epsom the lead.

In the second half Epsom were quick out of the blocks forcing Dunn to work hard in the goal. A penalty corner for Purley forced some energetic saves from Savage but Epsom continued to press forwards, spraying the ball across the pitch, pressing the Purley defence to dominate the game and claim a deserved 2-1 win.

Ali Murrell captain of Epsom Embers O40’s men
‘It has been a long journey to get here having been drawn away from home in each round and travelled over 1,500 miles to get to the final so it really has been an epic journey. It has been fantastic day and gave our team a new lease of life. It is a beautiful pitch to play on and we had a great crowd. We will come back and defend our title next year!’ 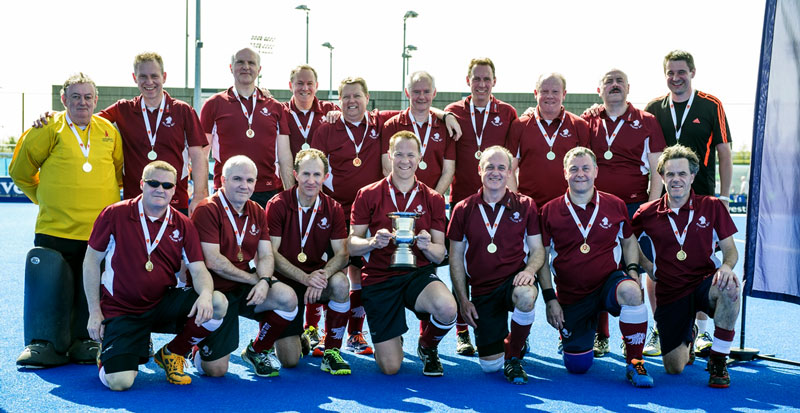 Epsom Embers O50’s completed the silverware hat-trick as their Over 50 men won 3-2 against Ipswich to claim the trophy.

Epsom took the lead early with an emphatic Richard Skinner short corner strike into the net to give the Maroon shirts the advantage. This didn’t dishearten Ipswich and Steve Askins found himself unmarked in the circle but keeper Pat Baker made sure he cleared it out of any danger. Dramatically Ipswich saw two of their defence sent back to the half way line during a penalty corner but keeper Bignell confirmed his dominance and cleared the ball away with a solid boot off his left leg as the crowd went wild. Early in the second half Roddy Wheeler dived in front of the keeper to deflect in Richard Skinner’s shot to extend Epsom’s lead. Minutes later Chris Mitchell got a sweet finish on the ball to make it 3-0 early in the second half.

With the clock counting down Andy Cook confidently got Ipswich on the score sheet with a straight strike from a penalty corner. Ipswich found a new lease of life and after applying the pressure they were rewarded again with a second Andy Cook strike. It wasn’t enough however but they certainly kept the pressure right down to the wire.

Mark Sydenham captain of Epsom Embers O50’s men
With Epsom having won two trophies already this weekend, there was tremendous pressure on us not to be the only bridesmaids. But we have played well as a team all season and it showed in final, maybe not the last five minutes when we got a bit tired. We have had a great tournament and to play on this sort of surface is just a dream.