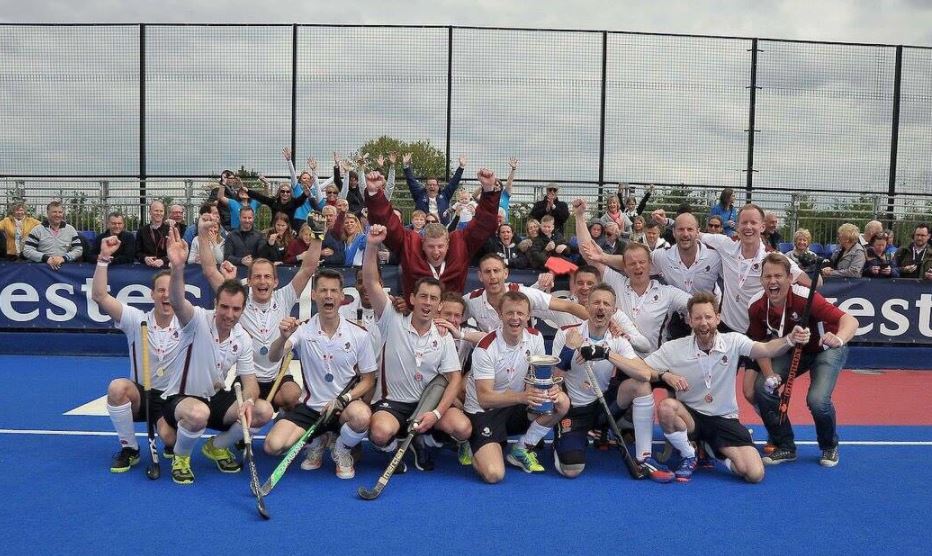 Epsom made it back-to-back wins in the England Hockey Men’s Over 40s Trophy with a 3-1 win against Khalsa on another fine day at the Olympic Park. Epsom turned out a strong squad of Men’s 1s legends past and present, bolstered by guests Andre Bailey, Rob Stone and Andrew Spooner, with both sides bringing lively support numbering up to 200 making for a lively atmosphere.

Epsom dominated the first half with James Harris and Paul Atkinson looking lively in midfield. Epsom pressed hard and on 20 minutes Andre Bailey jinked down the left touchline and forced the ball over the line from a tight angle for 1-0. Epsom subsequently had chances to put the game to bed but Khalsa survived and then equalised out of the blue, their centre back firing a quick free-hit from the half-way line to a high forward whose brilliant first time deflection made it 1-1 at half-time. Khalsa were buoyed by this and started the second half looking threatening, drawing one superb save from Colin Savage at a short corner. The game then turned when Khalsa’s influential centre-back was shown a straight red card for an ugly challenge on James Harris, an incident which sadly ended Harris’ fine game through injury. Following this, Epsom resumed their previous dominance and piled on the pressure on 10 man Khalsa, now without their key defender. With 15 minutes left Epsom skipper Ali Murrell fired home a short corner dragflick to put Epsom 2-1 up. This opened up the game and with 10 minutes to go Kai Smith fired home an emphatic strike for 3-1. Khalsa had given everything and Epsom ran out deserved winners.

Players and supporters stayed to watch the remaining fixtures on what was another fine day for the club. Roll on next year!