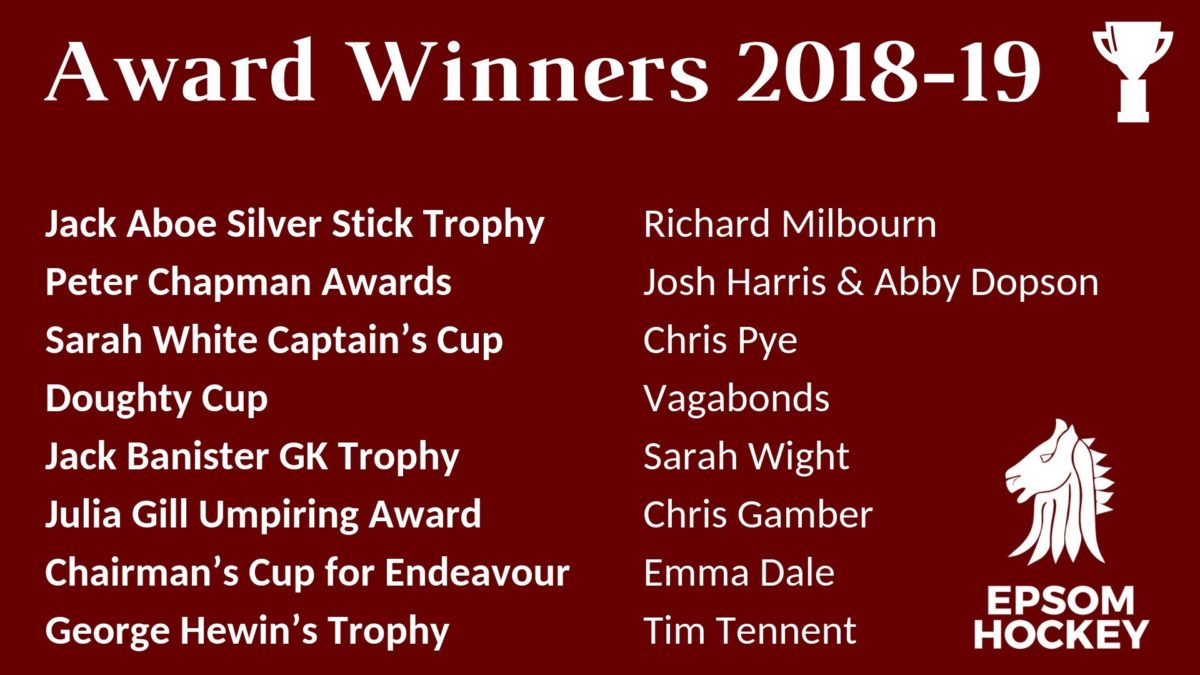 Celebrating all things hockey at Epsom HC, traditionally the club awards are presented at the AGM by the Chairman. This year was no exception, but they were the first to be presented by Penny Woods (aka Woodsie) who is settling into her role as Chairwoman of the club.

The 2018-19 season was another tough one for all with some fantastic personal and team achievements throughout the Club. Congratulations to our Men’s 1s who were promoted as league champions and our LO35s for winning the England Hockey Tier 3 Cup, their second piece of silverware in just a few seasons.

Onto the awards, all decided by the committee members each year…

A cherished award, the Chairman’s Cup for Endeavour was first awarded in 1970. It is awarded by the Chairperson to a Club member deemed to be the most deserving in their role either on or off the field.

Initiated in memory of George Hewins in 1996, the annual recipient of this award is to someone who has ‘made a difference’ over the course of the season or seasons.

Introduced in 1978 by then Club Captain (currently President of the Sports Club), Peter Chapman awarded a tankard and a vase to the most improved young male and female players of the year.

Awarded in memory of Julia Gill (National League standard umpire), the Umpiring Award is a very special one indeed; presented in recognition of those who give up their time to enable others to play the game we all love!

Current Epsom Sports Club Manager Sarah White (also Ladies 1s Captain in days gone by) donated the Captain’s Cup in 2009, awarded to the captain who has made an outstanding contribution to the Club throughout the season.

The Jack Aboe Silver Stick Trophy is awarded to the top goal scorer in the senior section. This year our winner managed to crack in 28 goals!

The team with the best playing record of the season is awarded the Doughty Cup. The cup was first presented in 1980 by Mike Doughty, a GB player and General Secretary of Epsom Sports Club at the time.

Saving the best until last, the Jack Banister Goalkeeping Trophy was introduced in 2012 by ex-keeper Jack who now plys his trade back Down Under.

Congratulations to all the award winners for the 2018-19 season. All to play for next season. Good Luck everyone!