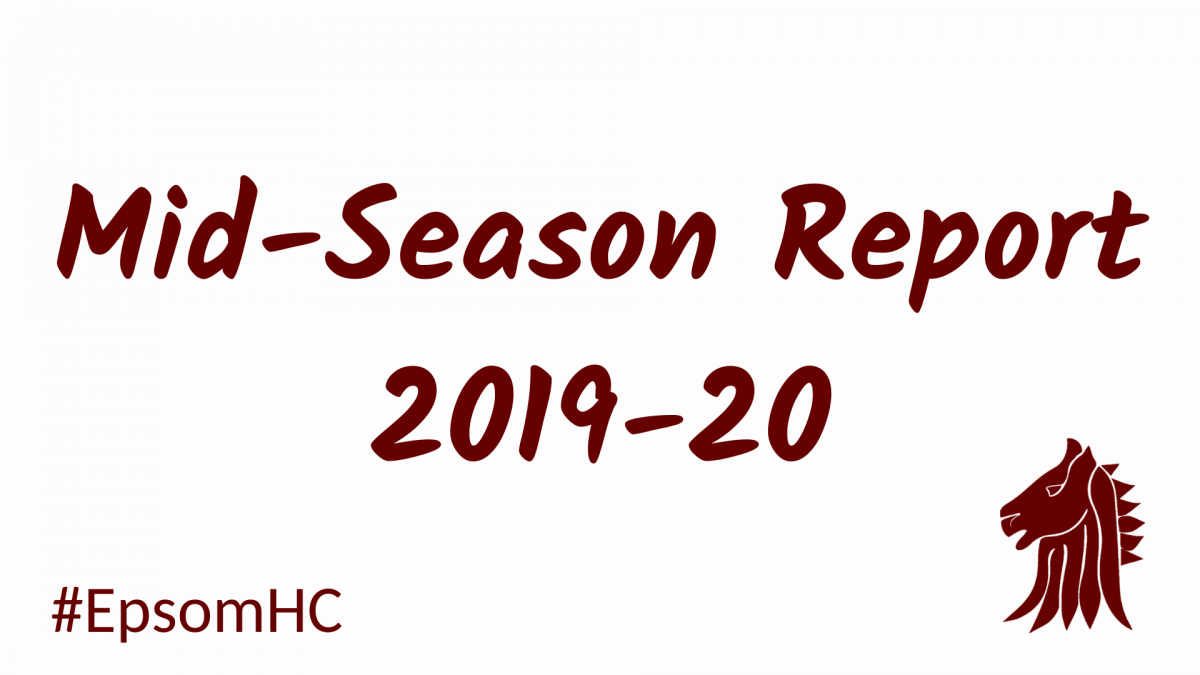 The 2019-20 hockey season is well under way with many teams just over half way through their fixtures. There have been some ups and downs, some fantastic goals, memorable wins, forgettable losses but as a Club, we go again, and again, until the end of season.

As well as league points there are Club awards to play for. Who will win the coveted Jack Aboe Silver Stick Trophy, Goalie Cup, Doughty Cup and Peter Chapman Award (to name but a few)? It’s all to play for. Keep going everyone, players, coaches, umpires and all involved week in, week out.  Go enjoy your hockey for the rest of this season….all the best!

Below are a few updates from our teams from the first half of the 2019-20 season.

Following their promotion from Surrey / Hampshire 1 last season, the Men’s 1s have been adapting to life in the South Premier 2 East league and went into the Christmas break in sixth place (P:11, W:4, D:2, L:5).

The team has fought hard with several younger players coming through and some excellent hockey at times, highlights being a 5-3 win against Sevenoaks 2s and in a narrow 3-2 loss to Wimbledon 2s. However, some inconsistency (not helped by injuries) has meant they have not strung together a consistent run of results.

There is everything to play for in the second half with almost anyone capable of beating anyone.

Star performers have been James Tuck in goal and the consistently excellent Jack Marfleet who is the heartbeat of the side in midfield. Top scorer so far is James Midmer with 7 goals.

The squad welcomed a number of new players last summer and with plenty of pre-season training and matches, they found their feet early on in South Division 2. Having been unbeaten in October, the team went into the Christmas break mid-table in 12th place (P:12, W:5, D:3, L:4), 11 points off the lead and all to play for!

The top scorer is currently April with 7 goals with Jude, Rhi and Woodsie all on 3 each. With so many putting in great performances the leading MOM is possibly Dunny.

Sitting mid-table in Surrey Div 1, the Men’s 2s are having a mixed season so far and couple more wins could put them in contention for a top 3 spot. Lying in 7th place results so far are as follows, P:11, W:4, D:2, L:5 having scored 23 goals and conceding a few more.

The Surrey Premier division gets more competitive each season and the Mighty 2s put in maximum effort every time they step on the pitch. The team has welcomed several younger players who are proving theirworth and creating some fantastic chances, playing some great hockey. Congrats to Louby who is the current MOM leader.

It’s onwards and upwards for the second half of the season as the team look to secure their first win, having been so close on several occasions with three draws and some narrow losses (ok, there was a big one to Wimbledon but 9-3 was a freaky score!). There have been goals though, with Ruth leading on 4 (all PC’s) and Claude, Liney, Jess and Izzy all have 2 each.

Currently propping up the table (not for much longer we hope!) the L2s have W:0, D:3, L:6. Working on the goal difference!

The Men’s 3s were the top of the league in terms of form going into the Christmas break having lost their first five matches, drawing one and winning five out of the last six matches in the first half of the season. Congrats to Gaz who is the current top goal scorer. It’s all to play for in the second half of the season which begins again this weekend away at Surbiton. Currently in 6th place in the Surrey Open League Prem,  results so far as follows, P:11, W:5, D:1, L:5 amassing 22 goals so far.

Having won their rearranged league game last week v. Spencer (3-1), the L3s are on the up in Surrey Div 3 and long may it continue with potential to climb from mid-table pretty swiftly. There have been plenty of goals, the team have scored in all but one match, and goal scorers so far. The most notable win was a 6-2 win over Corydon in which Sophia got a hat-trick! The team have P: 9, W:4, D:1, L:4, scoring 19 and conceding 14 goals in the first half of the season.

It’s been a tough first half of season for the Men’s 4s in the Surrey Open League Div 1, with some fantastic wins, some heavy losses and a clean sheet (just the one so far)! They have scored plenty of goals with Macca (very short retirement) and Jack currently in the lead on 4 each. The team currently lie in 9th places, just 5 points off 4th place. They will be looking to tighten up at the back in the second half of the season and continue the scoring streak at the other end! P:11, W:3, D:1, L:5.

Lindsey continues to grab the goal scoring headlines in Surrey Div 7 with 8 to her name in the first half of the season. They have scored 20 with Hannah on 3 and Catrien and Emma on 2 so far. Despite a couple of heavy losses from the two top teams (Reigate and Tulse Hill) the Ladies 3s lie in 6th well ahead of the rest of the pack. With confidence and a stride in their step they have the opportunity to grab 9 points in January which would but them back near the top! P:9, W:4, D:1, L:4 with 20 goals for and 32 against. All to play for!

The Mustangs have put in some great performances with the youngsters are really pushing on. Having either won or lost their matches in the first half of season in Surrey Open League Div 2. The leading goal scorers are currently Torben and Loic with 3 each to their name. Congrats to Will who has been the most present with the MOM frame at the Clubhouse the first half of the season! Results so far, P:11, W:3, D:0, L:8 having scored 14 and conceding 27.

Winning their first four matches, it was a strong start to the season for our Ladies 5s in Surrey Div 9. However, they faced a little wobble before Christmas with various players injured and poorly. Let’s hope they have lulled the opposition into a false sense of security! Leading goal scorer is Steph with 6 and Asha is the current MVP with most ‘MOMs’ awarded. Currently in 4th the team results so far look like this, P:9, W:5, D:0, L:4, scoring 16 and conceding 23 so far.

It wasn’t such a great start to the season for the Ladies 6s who picked up their first points with a 1-0 v Cheam at Old Schools Lane (Caitlin’s goal). The team emulated that with their second win taking them into the Christmas break, this time with a 3-0 win over Kenley with Gina, Holly and Sarah on the scoresheet. There is a great spirit in the team and many of our Back to Hockey ladies are becoming regular players, which is fantastic to see. So far the results are as follows, P;9, W:2, D:0, L:7 scoring 7 and conceding a fair few more. Keep going ladies!

Currently in 3rd place in the Surrey Open Hockey League Div 3 it’s been a successful first half of the season for the Men’s 5s and they’ll look to get back to winning ways this weekend. Congrats to Matt who grabbed a hat-track v. Sunbury & Walton Hawks; Darron and Mark are in joint second with 2 each so far. The team are on 19 points alongside Horley with only Reigate above them on 25. Results so far, P:10, W:6, D:1, L:3 with 18 scored and 15 conceded. It’s all to play for this second half. C’mon fellas!

It’s a short and sweet update from the Embers in the London Hockey Masters League Div 1. “We’ve all been magnificent this season and are currently 2nd in the league!” Top goal scorer so far is probably Sean and most decorated MOM, possibly Tom. With two matches against Southgate in January the team will hope to score lots and pick up maximum points before playing top of the league, Old Georgians Fire in early Feb. Results so far, P:8, W:6, D:1, L:1. Keep it up!

Newly formed this season, team have been going from strength to strength in the London Hockey Masters League Div 2 (O50s) with 7 wins and 2 draws out of their 9 matches so far, scoring a massive 57 goals and conceding just the once, in their first ever match. Amazing efforts!

Taking the league by storm, the Vagabonds were undefeated until mid November. This was followed by a 4 game losing streak which saw them drop from 2nd to 6th at the Christmas break. There have been a lot of goals. With Clive on 12, surely he’s got one eye on the Jack Aboe Silver Stick Award. Nick has been instrumental in the team and is currently the leading MOM award winner. Results so far, P:10, W:5, L:4, D:1 with 42 goals for and 38 against (a little generous?!).

We welcome players of all abilities. In addition to the above teams who play regular league matches on a Saturday we offer Walking Hockey and Back to Hockey sessions on a Thursday. We also have a thriving junior section who train and play matches on a Sunday. For further information on any of the above or to join us here at Epsom Hockey Club, get in touch!