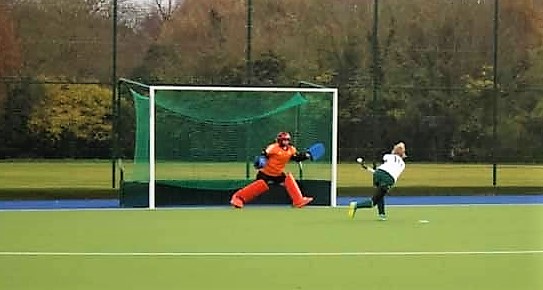 The O35s ladies welcomed Canterbury HC in the lunch time push back of the Tier 1 competition. The teams have met several times over the years with mixed results, but this was a first at Old Schools Lane.

Looking sharp and relaxed, ready for the challenge, our ladies started strong. A quickly taken free hit from Penny Woods led to an early chance for captain Claude Stanford who scored the opening goal in the first couple of minutes! Was this to be their day?!

Epsom enjoyed plenty of possession in the first half and kept the pressure on the visitors; their goalie having to pull out a number of saves. Canterbury were always a threat and despite squandering a couple, they were back in the game by half time.

With the crowd behind them, Epsom began the second half as they had the first. Piling the pressure on and getting back for the counter attack, it was a tough second half for all! And then it came, the second goal smashed in by Jude King; 2-1 up with 15 minutes to go!

The home crowd continued cheering the ladies on, and despite a few injuries the visitors persevered. The game was levelled at 2-2 with a short corner and, with clock ticking down, it was all to play for!

It felt like forever when the final whistle blew. Time for a shoot-out to decide on a winner. Both teams gathered to compose themselves and decide on five strikers; the goalies pacing and readying themselves for the end to an exciting game.

Mel Clewlow stepped up for the visitors and put it hard and low to the goalie’s left. So close, but 1-0 to Canterbury. First up for Epsom, Sarah Cockayne delivered a belter of a flick. 1-1!

A well taken flick by Cara Brogan-Jones gave Canterbury their second and Michelle Clark was clinical in keeping Epsom in the game! 2-2.

The pressure was mounting and up stepped Gemma Luckhurst to place the ball down the middle for the visitor’s third. Epsom’s Jude King kept her head and matched them! 3-3.

Then came the first save by Sarah Wight for Epsom, firmly cleared away with her left glove. Next up for Epsom, Pamela Gregory calmly slotted it home. 4-3.

After another fine save from Sarah Wight, this time to her right, and they had done it!

Epsom won the match 4-3 on penalties. What a fantastic achievement from such a tight-knit squad!

The match was played in great spirit. Thank you to the umpires and super supporters. All the best to Canterbury for the rest of the competition.