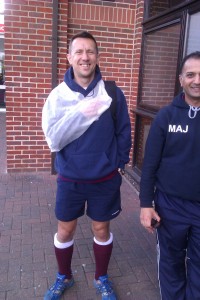 With league positions largely decided this season, we were playing for pride today and the knowledge that too often we struggle against a similar Woking team to ourselves. So today we were up for it, and rearing to get going. Early start, but we were all there as requested 10am (hang on, all there apart from Captain email who was delayed whilst chatting – apparently). And Matt Smith very proudly bringing back the 4’s TFC pink shirt to hopefully pass onto the next victim in the bullying chain.

First half, and we were awesome, total dominance from the start, we played as a team, passed the ball round, had composure and looked constantly dangerous. Early on a Mazza run down the wing and break into their D resulted in the ball pinging up across the goal, and I managed to pick the bouncing ball from about 1 foot up, and tap it between the keepers legs for a well deserved and early lead (see on, but Jamie P please note, a tap and some contact is all you need at times). This pressure continued with some great runs by the midfield and forward line of Mazza, Dan, Jack and Jack kept looking dangerous.

Eventually Jack R turned the ball at the top of the D, and reverse placed the ball wide of the keeper and in for 2-0 up (again you don’t need to break the net to score a goal). OK so I was pumped up for this win, and allegedly (according to the other 21 players, 2 umpires, 6 supporters and 2 dogs) I tried a rather dangerous one handed backward swing shot on goal, and this resulted in a correct telling off my Mr Breese and him revealing his green card, with appropriate words of advice. I guess the verdict was it was perhaps a bit over zealous and maybe bordering on dangerous.

Game carried on, and eventually one of our short corners paid off, with the ever reliable Matt Smith (keen to depart with the TFC shirt) cracking one in, which deflected off a couple of defenders sticks before crossing the line for a commanding 3-0 win at half time.

Not much happened during the second half………Until…….. Jamie Gould gave away a short corner, in clear and obvious knowledge he was excused from defending it, as had a bad tooth. So Simon agreed to come back with myself and join the ranks of the 4 idiots trying to defend the short corner. Simon ran first and took the shot (which was high) on his hand and hit the deck. Immediately saw the blood and then more blood and then a bit more.  And when you can see the bone sticking out and hanging down, sort of realised this needed a bit more than our 1960’s first aid kit consisting of a dirty bandage and some savlon, and off to meet the nice staff at the local Epsom A&E it would be.

A)     The match – well we fell apart, and to be honest must blame Maj for panicking about Simon, deciding he should drive him to A&E as captain, then realising we had supporters and they could. In a nutshell utter confusion followed, and we restarted with 10 players, yet 2 substitutes left on the side lines, and it took us about 7 minutes to realise we only had 10, to bring on an 11th player in a panic, spend the next 10 minutes trying to regroup and ascertain who was playing where, and then by the time we had regrouped to have only about 7-8 minutes left of the game, and failed to progress beyond our 3-0 win.  Dominance continued with Andy Holder in our goal, not touching the ball all game, and 2-3 good chances not taken by Epsom in the second half, including a fantastic move round the keeper back across the open goal to Jamie Perkins for a simple tap in from about 2” out, but who missed and was duly awarded the TFC shirt. Harsh but fair.

B)      A&E – so Simon managed to get to A&E, but fainted in the emergency ward and was helped back to his feet by a nice young nurse (actually he has no idea who helped him, but this sounds better). Myself and Maj visited Simon in A&E (after I did bar duty and managed to smash the till – not my fault and it just fell off the counter – all by itself!) and the verdict from the nurses was he had ‘part amputated’ his little finger!   (Jamie Gould please don’t feel bad about giving away the short corner, or letting Simon take your place in defence)  Now this sounds painful and I was just watching, hate to think how it felt for Simon. Anyway, our thoughts remain with Simon for a speedy recovery, and they were hoping to move him to Tooting hand specialists later in the afternoon and save the end of his little finger, but seriously were not convinced either way. We await the outcome.

So a great result, an absolute shit hot first half, and much of the same in the second half just without the hot bit. Hope Simon makes a full recovery and will have more details for our final game of a great Season vs. Reigate next week.   A well deserved 3-0 win, and we deserve our 6th place in Division 1.